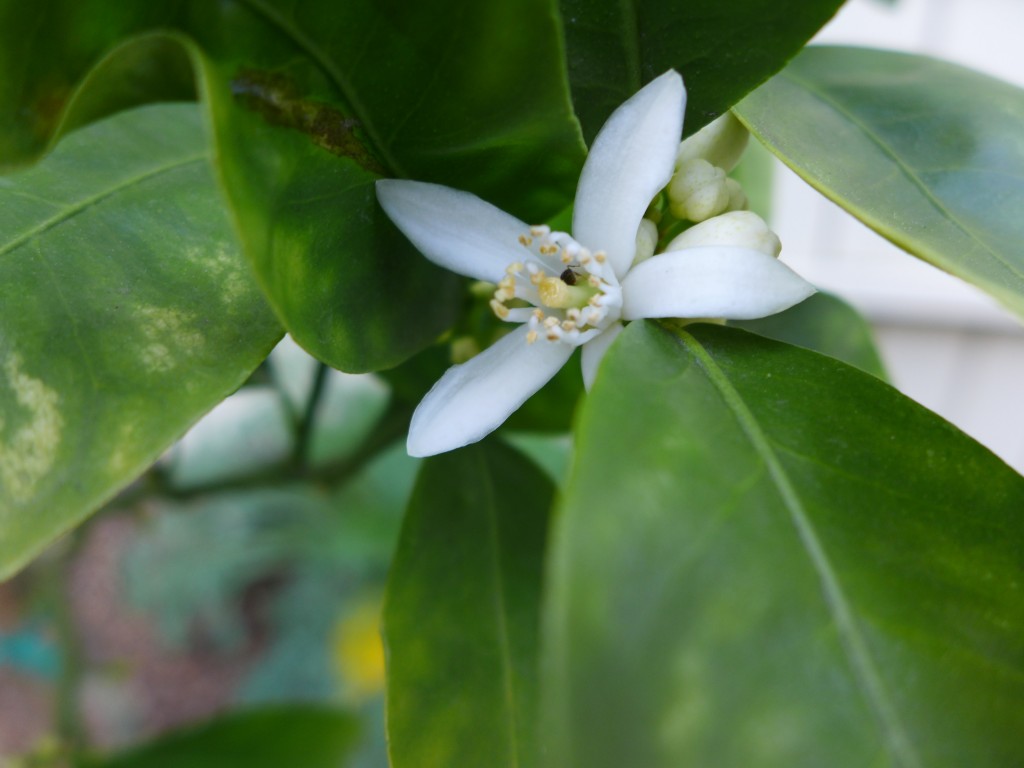 My Mandarin Orange is blooming.

My fiction writing continues to not happen. I knew this was going to be the case when I had to get a job. That’s why I freaked out for a week making my desk into my own wailing wall. It obviously doesn’t help that I spend a lot of time working on my apothecary business in my off hours. Then I take care of my family.  There’s no time left to get into the writing mode. It’s making me feel like a used up old sock. I just had 4 days off and spent most of it just tired. I did a tiny bit of gardening. Hung out with a couple of friends. My family. And not much else. I did open scrivener with the intent to write and I did torture a couple of sentences to death editing a a chapter of Spring, the next Cricket and Grey book. But there was no energy in it. It feels like all the words are dead inside of me.

Maybe it’s writer’s block. Maybe it’s the general annoyance at having no beer to look forward to. (Haven’t had any alcohol for 2 weeks now). Maybe it’s just a deep funk. The majority of my writer friends are cranking out book after book, some of them writing a book every 3 months. I thank other people’s weird gods for the few writer friends I have whose process is a much slower thing, who stumble and crumble from time to time as I do. Without them I would definitely forget that a lot of the best books in history took years to write. Granted, they had to hand write that shit, but still. These speedy writers just take all the skin off my nose.

I did finally get the first chapter of “Bad Romance” finished. That felt good. This is my effort to write a fun breezy fast book. No need to get all wound up in writing exquisite prose, I just thought it would be really funny to trap a couple of modern people in a bad romance version of historical San Francisco. I thought it would be my writing palate cleanser. I’ll just write like a mad-woman, I said to myself. I’ll just crash right through this book and not care about every goddamn sentence like it, I don’t know, like they all matter individually. FUN! BREEZY! ROMANCE! You can’t tell me that most of the romances I’ve read took a year to finish the first draft or even the whole thing. Those things are whipped out. They follow fairly predictable plots. SO WHY THE FUCK CAN’T I DO THAT?

So I thought I’d start chapter 2 of the breezy fun romance novel. Maybe even “wing it” like so many of my writer friends do. But then I realized that to describe the streets of North Beach or China Town in the 1870’s I need to do a little research first. At the very least I need to know if all the streets were dirt back then. What was going on there? So this morning I looked up San Francisco on Google images. Know what I discovered?  San Francisco in the late 1800’s is a very dark place if you’re not white. Well, I kind of knew that anyway but the way people talk about SF in the good old gold rush days always makes it sound like everyone could get by if they wanted to.

My main character, Geneva Thoms, is half white and half Miwok who is always being mistaken for a Mexican. The other main character, Simon Wong, is Chinese American, several generations in. So if I plonk those two (plus Geneva’s misogynistic white ex-boyfriend Rick) into late 1800’s San Francisco, they aren’t going to experience the gay* fun side of the city. Now my book is a little less fun.

I love doing research for books. I’m wondering how much research the average romance writer does for each of their books? I feel I need to read a couple of books about opium dens, the racism against Chinese people (what is the “China Town quarantine” all about?), and about both China Town and North Beach specifically as that’s where most of the book will take place. Not so breezy. Not so fast. Not so fun.

The original idea was to set them into a bad romance version of SF, so in theory I can make shit up and not be strictly correct. I can paint a San Francisco based on broad stereotypes and people’s idea of San Francisco as the heart of the wild west (as opposed to the stark reality of it). Prostitutes with hearts of gold and all their teeth and no veneral diseases; villains dressed in all black flashing gold teeth (but probably not missing any), wearing an entire arsenal of weapons; heroes with long silky hair, losing their shirts at random moments so that pert-nosed feisty heroine’s can fight their desire to touch those bulging oily muscles…while my modern main characters scoff and try to figure out how to get back to reality.

I too want to write quick books and this was supposed to be my first quick romance book. For years I’ve thought that maybe I could make an actual living writing romances. This was going to be my first one, my charming debut, my fling with fast writing and lots of fun.

But damn. I just can’t let go of the details. Of getting them right. And funny isn’t my gig. I constantly intend to do funny and end up poking all the light out of the sky and raining darkness down on my characters. Rape, torture, murder, mental illness, sickness, death is where I always end up in my writing, but with happy endings of course. I intended my first novel to be a dystopian version of a Mary Stewart suspense novel. That was my inspiration, if you can believe it. I wanted to be the new Mary Stewart. I wanted to write suspense books that always have some element of romance in them. Intelligent richly written novels of suspense.

I’m meant to be a novelist. I’ve always been a novelist and a poet in my heart. So why is it like pulling my own teeth out with pliers to get even one lousy chapter written in the course of several months? I miss the energy I felt writing my fist novel. I felt the passion and excitement from beginning to end of writing that novel and editing it several times. Where did that fire go? Am I dead inside now?

Straight From The Jugular: behind a writer’s lens

Straight From ...
Behind a Writer's ...
By Angelina Williamson
Book Preview

What have you missed?