This isn’t a place I’ve lived.  It used to be Adeline’s Bakery on Van Ness and Geary.  For years I would get cheap coffee and pastries while waiting for Golden Gate Transit buses or on my way to one job or another.  It was a place full of old people and cranky people and often homeless people.  All the other people came in to get things and would leave.  Now it’s shut down and walled up.  I’m not even sure you can make phone calls from this trashed public phone.  I think it’s missing the phone.

This was where Philip and I lived for the first two years we were married.  1350 Sutter Street, a half a block up from Van Ness.  Not a quiet location.  We started with a tiny apartment with a huge bathroom and a kitchen that was barely functional with a fridge that was literally from the 1960’s with a permanent frost problem.  Then we moved to a bigger (much nicer) apartment with a wonderful kitchen that had apple green walls and the tiniest bathroom I’ve ever had.  We loved it!  It had built in book cases in the living room and this amazing built in vanity with desk that I used as my writing nook.  We paid $850 a month for this place. 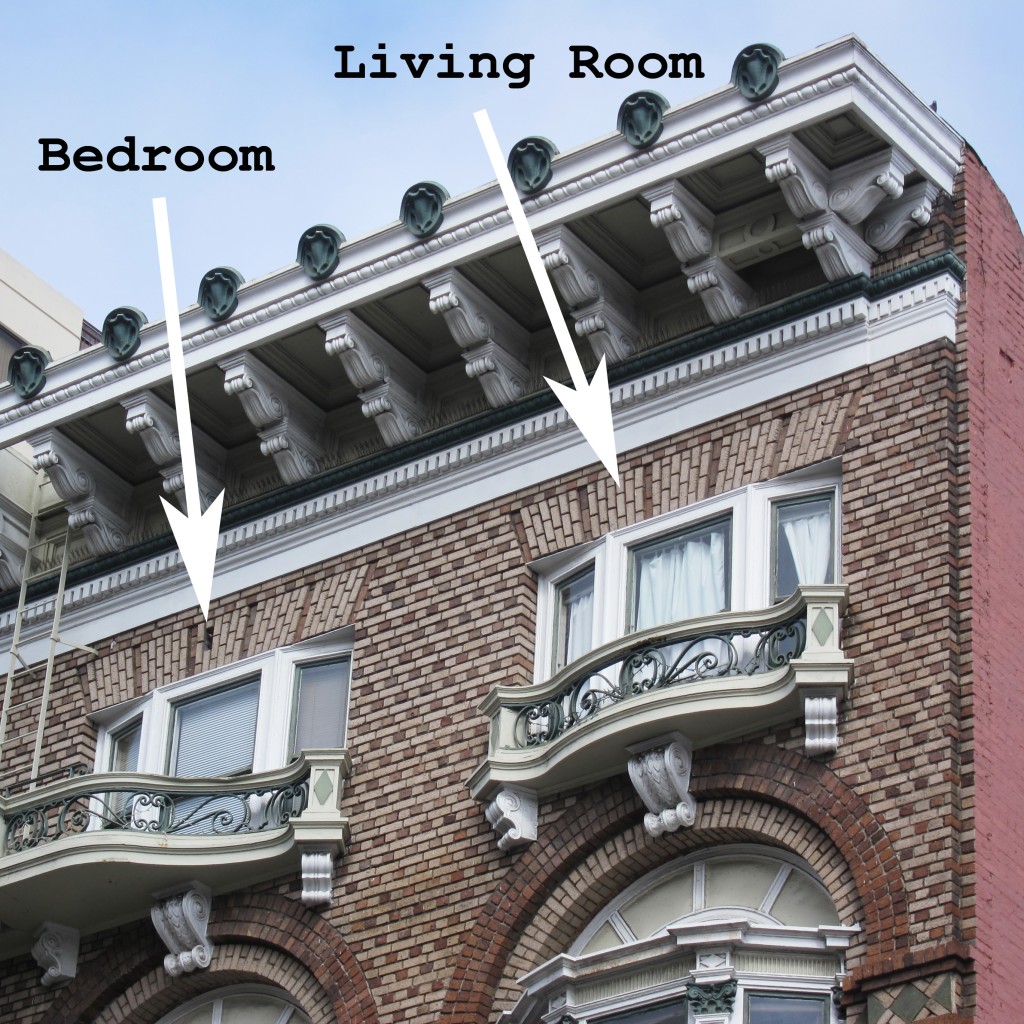 We had the pretty windows on the top floor with the weird balconettes you couldn’t step onto but that collected really strange crap – garbage and  bird shit and city grime that formed part of our magnificent view.

I loved my kitchen so much.  This second kitchen was small by suburban standards but a nice size by small apartment standards.  It had a built in china hutch, a modern newish fridge, room for a dining table, and a pretty window ledge that I killed many an African violet on.  The African violets looked stunning in my green kitchen but I couldn’t figure their needs out.  I was very busy writing poetry at the time and rather hoped that plants in window sills could just be watered when thought of and flourish.

I have shared pictures of this building before.  Several years ago, I’m pretty sure.  This is the only place I ever lived all by myself.  I was very proud to finally be completely on my own as I’d always dreamed of – single girl living city life in glamorously grimy building.  This building and my life there is what inspired the first novel I wrote that is forever stuck in rewrite mode.  I paid $520 a month for this one bedroom apartment that came complete with a major cockroach population, a brick wall view out of one window (very city-chic), bums in the entryway of the building, a main entrance door with constantly broken entry code, a creepy landlady who took a real fancy to me and frequently tried to lure me into her stuffy scary apartment, and as if that wasn’t enough for anyone wanting a real urban adventure, the building trashcans were in a basement meant to be used by serial killers with a barely locking flimsy back door to the alley.

To top the whole luxury package off – my bedroom window looked out on whore alley.  When the moon was high and I opened my windows to let in the night air and gaze out on the moonlight – I could count on being serenaded by a blow-job in progress or by some happy heroin addicts shooting up together, their needles shining in the moonlight like diamonds.

This is Ada Court.  This is the tiny street I had to stroll up to get a look at my old bedroom windows and see the old favorite spot of whores and addicts that gave me my daily entertainment.  This street was full of flies.  An unnatural number of flies.  And stink.  Like unwashed bodies, dog shit, and old concentrated urine smells but with the number of flies you would expect near a decaying corpse.  Which made me think how happy I was to not know the real source of the flies that might be hidden in any one of the basement grates and windows lining this little court.  The graffiti is quite pretty though.

I took this tour of places I’ve lived in the city on Friday.  I went in to meet my friend Alice (of Futuregirl.com) who I’ve known on line for 7 years but never met.  We had lunch at Darn Good Food and I had a great time waiting for her arrival watching herds of suits roving the streets looking for sustenance.

There was a scary homeless man with long white hair in a knitted cap whose bottom lip was a huge misshapen mass of bumps and twists – like it had once been put through a meat grinder and then reattached to his face.  The poor dude was not in a good way and once having passed me on the street he fell down.  I wasn’t sure what I should do, if anything, he seemed like he might have been drunk but what if he was simply really sick?  There were a pair of officers of some kind in a car right near him that did nothing.  I wanted to ask him if he needed assistance but I’m ashamed to say I was really scared of him.  Two men walked by and I heard one of them say to the other “I was tempted to kick him in the ass!” which made me very angry.  If my son ever cherishes the urge to kick a homeless person when they’re down (or at all, under any circumstances) I will know I have either failed as a mother or I gave birth to a bad seed.  Fuckers!

After meeting Alice for lunch I walked back down to Market Street and kept walking until I found a Muni stop where I could catch a Hayes Valley ride.  When I caught the Muni I sat down next to a very tiny shriveled old man who shrieked when my leg grazed his coat.  So I stood for a good portion of the way listening to two men talking about really dumb people they know who committed a crime they got caught for that they wouldn’t have got caught for if they weren’t such dumbasses.

My one pair of comfortable shoes needs the elastic fixed so I chose to wear my ghilly brogues which used to be really comfortable.  My feet are bigger now and so by the time I made it to my friend Kate’s house in Hayes Valley my pinky toes were reduced to stubs of flaming pain.  I’ve been friends with Kate since I was 17 and she was 35.  She’s like family.  We haven’t seen each other for quite a few years.  First she moved to Texas and then I moved to Oregon.  It was great to finally meet up again.  I also got to hang out with her son who has the same birthday as me and who I frequently chatter with on Facebook, and her husband who is such a kind and cool person and who, it should be noted, inspired Philip and I to explore brewing our own alcohol after he shared with us an amazing bottle of strawberry wine with us that he fermented himself.

Kate says I can come stay in their guest room any time I want.  That’s like having a pied à terre in San Francisco!

This weekend I got the first chapter of the second Cricket and Grey book written!  5,000 words!  It’s total crap, of course, as all first drafts are, but I finally broke through whatever barrier was holding me back (trying to start the second book in third person was the main barrier, I switched to first which is how I started the first book too) and can now start the second chapter.  It feels great to get back on track with that.

Jane Doe is still hanging out in my head all the time and I still don’t know how to fix it.  I’m just going to keep hanging onto it until it comes out.

Now I have to go make chutney and get more produce and I just have way too much stuff to do for a Monday.  I have to start photographing my shop items and I have to write my tutorial posts (majorly avoiding it – bad Angelina!!) and so much else.  I want to make ginger  beer and I have the ginger but haven’t done it.  The beautiful thing is that I can fit a lot of this stuff into my days now whereas I could not do it before.

So I better get on it!

Hope you all have a great Monday!