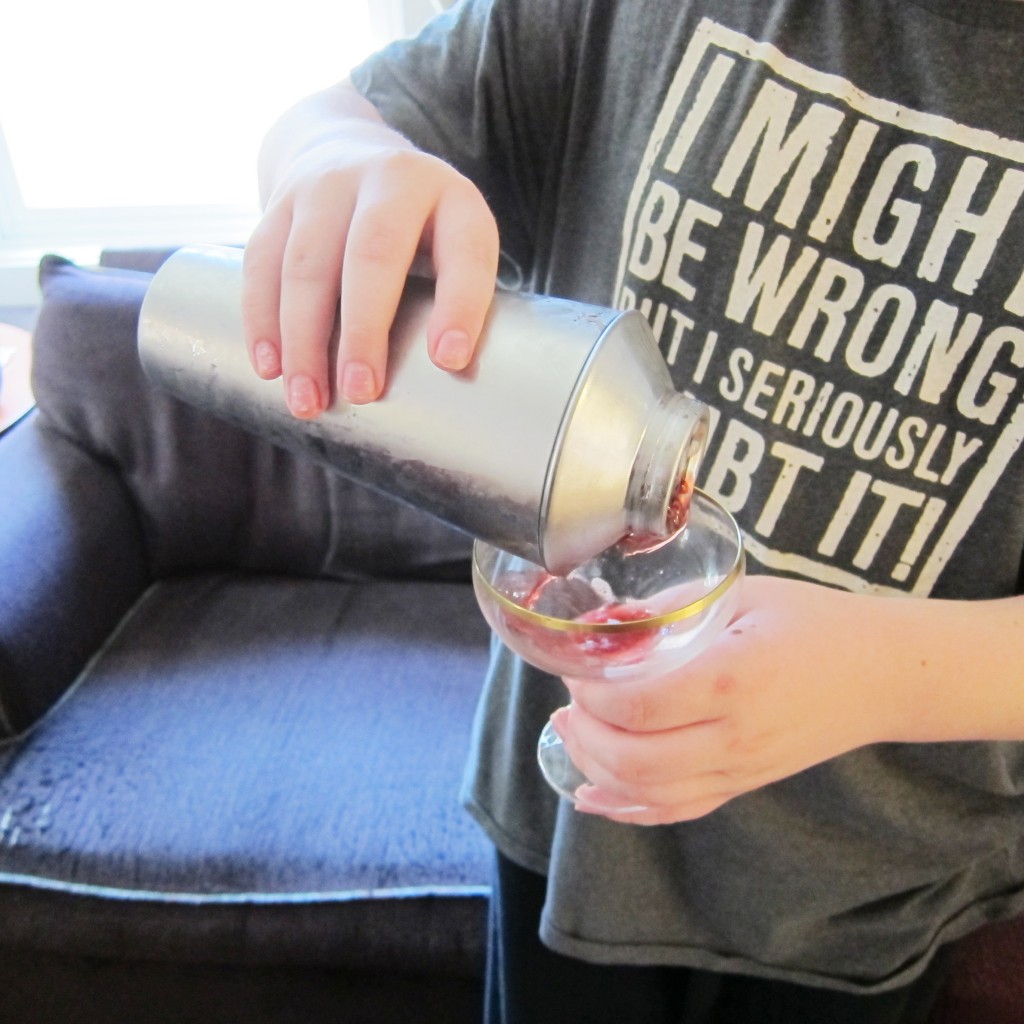 Max’s new toy is a martini shaker.  He likes to mix sodas and has moved on to fancy juice mixes.  Yesterday he made me a cherry vanilla juice drink and then a cherry lime with two drops of vodka for me.

He also ate two small cheese sandwiches on toasted sourdough bread with butter and mustard.  Normally I would never put butter on a cheese sandwich but he insisted I make him buttered toast and then turn it into a sandwich.  This kid has not liked cheese since he was small kid.  There was a very brief romance with Baby Bel cheeses and not long ago he tried a thin slice of cheese on a veggie burger and didn’t like it.  Otherwise the texture of cheese has been deemed unacceptable to him for years.  Cheese crackers are a different story.  The Oatmeal writes about cheese and cheese making and suddenly he wants to try some cheddar or Swiss cheese.  He ate a small piece of cheddar and liked it.  This is one of those times when social and media influence is pretty great.  Now he wants to try the elderflower cheese we’ve been raving about that Philip discovered at Trader Joe’s.  He wants to try sharp cheddar too.

His expanding tastes are both wonderful and baffling.  He is still finding it difficult to stick with flavors and new foods but his continuing exploration is absolutely the best thing an extreme picky eater can do.  He’s finding enough new flavors he likes to convince him that there’s a lot of potential for enjoyment in the food world that he was previously not open to.

But the biggest news is that he finally got an official IEP!  It only took four years of badgering the school system in Oregon and continuing down here in California to make this happen.  As could be expected, Max didn’t qualify for any major well defined learning disorder or meet any of the markers for autism that the school uses.  The speech and language specialist did say that he definitely shows some autistic qualities – but falls in a grey area.  He will get help with pragmatic language use and social interaction because she found that he doesn’t register subtle social cues at all.  Academically Max is predominantly in the Superior range with his math skills falling in a couple of different ranges which revealed (as explained to me) that he understands high math concepts but when it comes to the basic concepts he has difficulty which is explained by the main thing the evaluations revealed.

Max has a significant visual processing deficit which especially affects his math skills.

Some of the information revealed wasn’t that surprising and others were.  The visual processing deficit explains things that I wasn’t even looking to have explained but the fact that Max has such difficulty with drawing assignments – and it isn’t that he can’t draw because he most certainly CAN – it’s that it’s harder for him and takes him longer than average and he gets frustrated and overwhelmed and gives up.  He found a great drawing expression in stick figures and is quite good at making very expressive stick figure animations and comic strips and I get why now.  Last year he drew a fleshed out hand for a poster project and he hadn’t tried drawing three dimensional for ages and suddenly he whips out this really well drawn hand – so he can do it but he avoids drawing quite emphatically most of the time.

This also explains his strong aversion to writing assignments, an area also affected by a low visual processing time.  Writing assignments make him anxious and he loathes having to erase even a single word an rewrite it because, in his mind, every word he writes TAKES SO MUCH TIME AND EFFORT AND HAVING TO DO EVEN ONE WORD OVER IS LIKE ASKING HIM TO SKIN HIS OWN FINGER.

The math thing is weird because in fourth grade he was put in advanced math because the teacher said he was bored with the regular math curriculum in class and knew the material really well.  He has also tested between average and above average on nearly all his state math tests.  In sixth grade the math teacher thought him gifted in math and if you remember – tried to make him learn programming.  Which Max HATED.  He said he hated starting with that awful blank screen and then filling it with those 0’s and 1’s.  Which maybe makes sense now if his visual processing speed is significantly low.  Programming might be a certain kind of hell for someone with that issue.  In any case – the math deficiency surprised me but then it made sense.  Max has always disliked math even though his teachers have all thought him on the gifted side with it.

After coming home I wondered if it was necessary to continue having Kaiser evaluate him, now that he has an IEP.  That’s been my driving aim – to get him some extra support in school.  I’m waiting for one of his teachers to fill out an evaluation form to give to his psychologist so that we can move on to the next step.  It’s understood by me that Max, obviously being so high functioning, very likely may not end up being diagnosed with anything.  As the psychologist says, we may just have to conclude that he’s an “odd duck”.  So do I use up Kaiser resources to have him evaluated?  What can be gained by any diagnosis if they did find he met their diagnostic markers?

I was on the verge of calling it off but I’ve decided to go ahead with it and here is why: the school’s evaluation uncovered an issue that has significantly been affecting Max’s academic experience even if it hasn’t resulted in academic failure.  This is something no one suspected or suggested before and now that we know what is going on – it can be addressed and knowing where he’s got issues can help him succeed.  As a parent I can help him better too – in coaching him through homework I can explain to him why he is struggling and why math makes him so anxious and why written assignments not only take him so damn long but stress him out so completely.

The school tests are all geared toward revealing academic shortfalls and challenges.  But a psychological/neurological evaluation covers a person’s whole orientation to the world.  Maybe Max will be found to not have any specific disorder.  But what if evaluating him can show us areas of significant challenge that could then be specifically addressed?  My main problem is knowing how to help Max in his life.  Socially he is not normal and I have major concerns about how healthy his social life can be if some of his issues are not addressed.  The value in seeing if he fits into an established set of behaviors that has a name is that if he does – I can more easily discover what has a tendency to work well for others with the same set of behaviors and also seek support for him with those peers.

If he doesn’t really fit into any specific group – the evaluation still may uncover some specific areas of difficulty and give me something more concrete to grab onto when trying to navigate his social and emotional well-being.  A job that has sucked a lot of years off my life so far.  Well, that, and feeding him.  At least feeding him is finally becoming more of an adventure than a constant punishment in which I don’t succeed at nourishing my child healthily.

This information seeking mission is not complete until he has been evaluated by the psychologist and then, if it’s warranted, the Kaiser specialists.  I need to see this completely through.

In spite of not being done yet – I am so happy to have finally succeeded in getting Max an IEP and knowing specifically where his challenges are and the school is now on board and coming up with ideas to best meet Max’s need.  I appreciated that all of the people in the meeting unanimously agreed that taking Max out of drama class to attend a special ed class was not acceptable as he loves drama so much.  I also love that they all agreed that it would be a bad idea to rearrange his schedule forcing him to change his science teacher because apparently they all know that Max LOVES his science teacher and to mess with such a good arrangement wouldn’t benefit him since Max’s greatest areas of interest and his greatest gifts are with science and the language arts.

Lastly – I did not push for all this evaluating so I could hear my child be praised.  Some of what I just read in his report causes me concern and makes my heart a little heavy – yet every person who evaluated Max loves him.  They all think he’s super smart, funny, and charming.  And the speech and language specialist loved that Max told her what great parents he has (she included it in his report) and the school psychologist said she was so impressed in her first meeting with Max in which he talked incredibly lovingly of his cats.  His current English/History teacher said that Max is one of the best students he’s ever had.

Also – she said he has the vocabulary of a 28 year old.  But we already knew that.

When you’ve spent so much time worried about your kid and had so many challenges coaching him and propping him up and having your heart break when the world doesn’t get him or doesn’t like him – hearing these things is deeply gratifying.