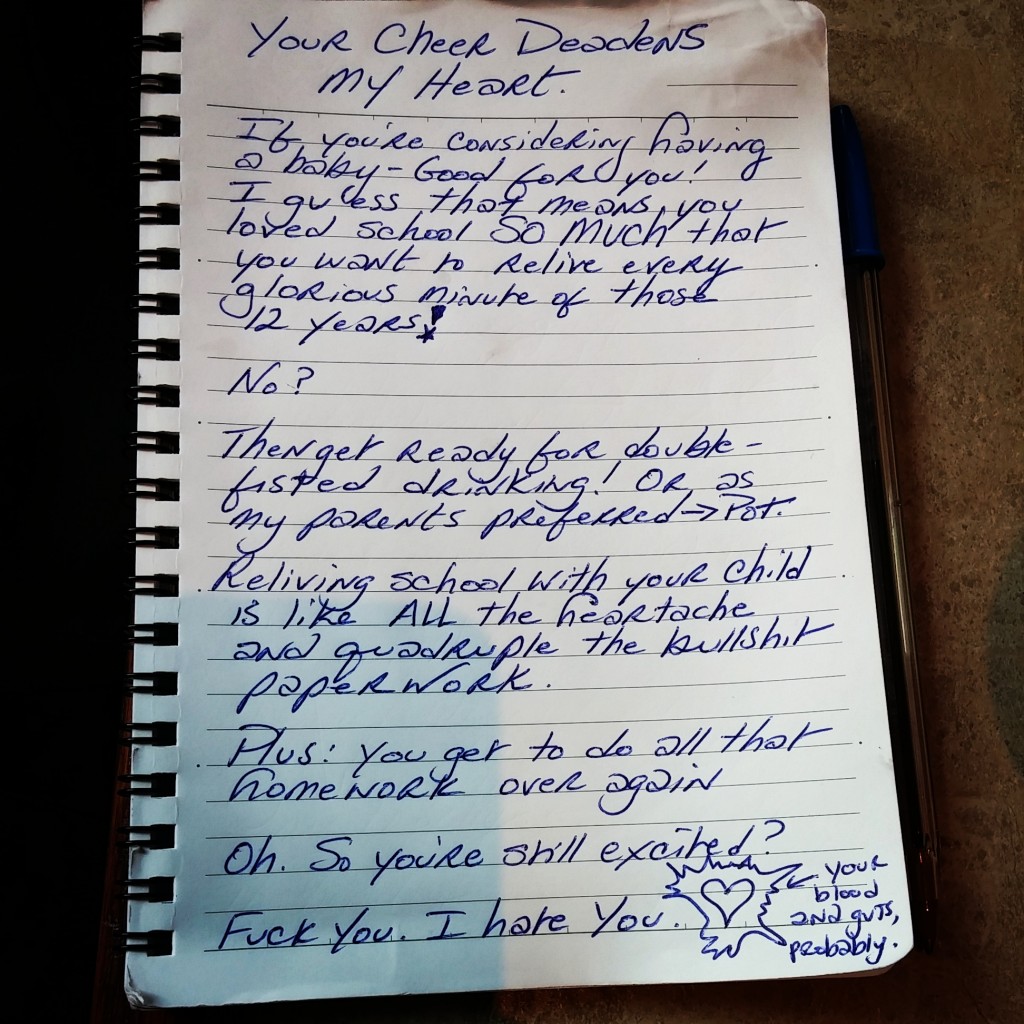 (This episode of #fieldnotes captures my week in emails perfectly.)

2. I smell like cedar and roses and contemplate my tombstone options: She Were Woodsy ‘n’ Shit, Fought the Good Word Fight and Lost, Saw Your Soul Through Your Underoos, Bitch-Slap Incarnate.

3. Settle on “Bitch-Slap Incarnate” and wonder what I should say in my own ghost eulogy.

4. Spent so much time writing emails to the high school on Max’s account. Constantly trying to find the justice between my wild child’s poor behavior and the poor behavior of his teachers and an institution so denuded of financial support there’s little room for individual thought or need. Here is my child hungry for learning, hungry for discussion, debate, hungry to fill his head with facts… and two of his teachers have raised my IRE by being pretty shitty in the communication and teaching department.

5. This week’s emails to Max’s school has inspired in me the desire to write a handbook for Max on how to not be an inadequate adult.

6. I have always enjoyed instructions on how not to be things. They strike me as being more honest than guides that promise BEING things. “How Not to be a Douche-Copter”. “How Not to Win at Life”. “How Not to Crush Other Human Spirits”. “How Not to Kill Your Enemies”.

7. My hands have been going numb a lot lately. It’s probably carpal tunnel syndrome.  Or stage 4 cancer of my hope.

8. It gets increasingly difficult to hope for anything in the face of war, guns, hatred, racism, general and other specific types of bigotry, hatred, bloodshed, firearms, greed, power-hungry fuckers, desecration of earth.

9. Watched a fierce documentary about tribes deep in the jungles of Papua New Guinea and was stunned with the gorgeousness of untouched humans. Then pissed as fuck because misogyny seems to have been the first bigotry humans ever cultivated.

10. And then I see the penises wearing sharp horns and for the first time in my life I understand the innate power of pasties.

11. How much cooler would strippers be if they replaced their pasties with horns!?

12. I can’t process people thinking that killing other people’s family members is a just price for their own freedoms. It’s nothing more than sanctioned murder. Murder or genocide, depending.

13. There are people in this country who wonder how a person without faith in God can possibly have a strong moral center. I want to punch them for being such ignorant fuckers, but I don’t because my moral code dictates that punching people is a violation of their personal safety and is wrong even if they’re confirmed ass-wipes. My moral code dictates that I behave in a manner that promotes peace and respect, or at least peace.

14. Forgiveness is both a decision and a process. Forgiveness is something you choose and then practice because it takes time to achieve. To not forgive is a determination made by an individual to hold onto resentments, anger, hurt, pain. It isn’t necessary. It’s a choice we make at so many points in our lives. To not forgive is to nurture toxic clusters of pain in a willful manner.

15. I’m pretty sure Max’s English teacher is choosing to hang onto the belief that he intentionally hurt her. From my communications with her it sounds a bit like a manifesto to hold him accountable for an old pain he didn’t even know existed. She won’t even fucking talk to him about how he hurt her feelings, like a fucking teenaged girl.

16. If she hangs on long enough she can become a nail-and-hammer carrying martyr.

17. When I was growing up my parents somehow managed to instill in me (against my will) some deeply Buddhist principles. I find this amusing. An ex-Catholic and an ex-Jew had us kids “Ohming” at their Buddhist alter in a family circle so many times and I rolled my eyes and railed against their “fake” religion and yet, and YET, it seeped deep under my skin so pervasively I could never actually disconnect myself from the basic principles of it.

18. Still, I am nothing. Nothing in particular. Nothing organized.

19. I will never align myself with dogma.

20. My biggest non-secret is that I despair for the human race every single day of my life but also harbor such unwarranted hope for humans and I resent it every time they disappoint me, show that my hope is misplaced, make me ashamed. Then I wake up and it’s there, like a buoy, this inextinguishable hope for us all. It’s what I try to crush after every disappointment. After every act of cruelty, every injustice, every crime against humanity. I try to crush it because it costs me too much. I can’t afford it.

21. I am a paradox of treasuring order, rules, morality AND acceptance of chaos, individuality, and circumstance.

22. I have forgiven my aunt for what she did to my mom. I won’t invite her back into my life, because I’m not masochistic or stupid, but when I search my heart I find zero resentment or bitterness there for her. I wish her no ill. I hope for all the best for her. Not the fake pretending to forgive version. I told her I would forgive her because I believe in forgiveness. But I also told her it might take a long time.

23. Forgiveness is a process. A process I constantly engage in and hope that others do too because I’m a deeply flawed human being and make mistakes and commit social gaffs on a pretty near constant basis.

24. Some people might say that I believe in idealistic hippie peace crap. I don’t believe in fairies, magic, or God. I believe, when pressed, in nonviolence, harmony, love, peace, but powered by the proof Gandhi provided that nonviolence can, in fact, topple a continent infected by oppression.

25. Okay, yeah, I’m hippie spawn. The world needs us, us children of the pot-smoking bone-fide protesters of the previous generation as the origin story of our super-powers.

25.5. That last sentence is one hell of a mess but I’ve decided to leave it as it is.

26. I have the thick, wide, iron-clad thighs of Black Panther, but I wear red lipstick when provoked.

27. If you don’t have the imagination for peace and forgiveness, you’ve let your river of pain take over your shores and it will suck your heart into darkness.

28. A big game hunter followed me on Twitter and I want to yell at him for being such an asshole of a human being. I hope the elephants and tigers and bears and rhinos hunt his game-ass down and share pictures of him on a plaque with their facebook friends.